Why I Write Fantasy - Dana Davis 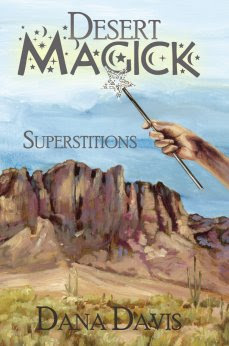 I'm pleased to welcome back Dana Davis to Wordshaping to kick off my new series Why I Write Fantasy.

Dana Davis is a ghost buster and award-winning speculative fiction writer who once worked for Hollywood and Disney. Her great-great aunt is purported to have been a mediums and a telekinetic back in the heyday of suffragettes, prohibition and Model Ts. She uses her varied background, along with odd family stories, to aid in her writing.
Amber: Why do you write fantasy?
Dana: Well, I've always had a very active imagination, and the inside of my head pretty much resembles the storage facility in the TV show Warehouse 13 after a tornado has hit. The kid who got in trouble for daydreaming in school - that was me. All that crazy stuff tends to work great in fantasy novels and is a wonderful outlet for me as a writer. Not to mention it's darn good therapy, too.
I was weaned on shows like Bewitched, Twilight Zone, The Addams Family, Star Trek and Night Gallery. Which probably explains a lot. And when I read, I usually want a total escape from reality, which is why I fell in love with the genre back in elementary school. My first favorite books were The Hobbit, a fantasy by J.R.R. Tolkien and the Forgotten Door, A sci-fi by Alexander Key. I feel most at home writing in this genre. 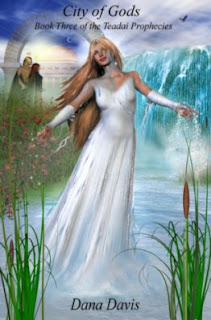 Amber: Tell me about your books.

Dana: I recently signed multiple book contracts with SynergEbooks Publishing. I write sci-fi, fantasy, and paranormal fantasy novels with horror and mystery elements. I also have a few books for young adults, including a sci-fi audio book that is scheduled for release this year. My most current series for adults is called Desert Magick and takes place in the here and now in Arizona. In this series, readers will come across witches, shape-shifters, sirens, medium, and a multitude of other paranormals. I weave Celtic, Native American and Greek mythologies together with elements of mystery and horror. And, of course, there is always some sex in the books.

Amber: What books do you read?

Dana: For fun, I read mainly fantasy and sci-fi, with a smattering of ancient studies and science. Some of my favorite fiction authors include Manda Scott, Caitlin R. Kiernan, Jasper Fforde, Orson Scott Card, Anne Rice, Kim Harrison, Robert Jordan, and Alastair Reynolds. I recently got a Barnes and Noble Nook, so I’ve been downloading a lot of eBooks and am finding that I prefer electronic to paper.

Amber: What are you writing now?

Dana: I’m currently writing the third book in my Desert Magick series, which should be available as an eBook by the end of this year. The first book Desert Magick: Superstitions is available in trade paperback and coming soon to electronic format with SynergEbooks Publishing. The second book Desert Magick: Dream Catcher will be released shortly after that.

I have been doing a lot of fun research for the Desert Magick series and recent trips to Salem, Greece, and Ireland have fueled my imagination. And I currently participate in local paranormal investigations. Yep, I’m a ghost buster! 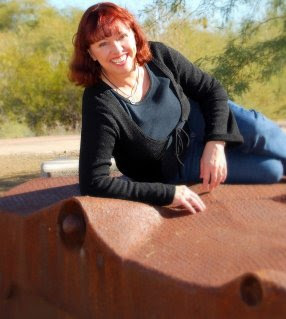 Dana Davis is four time award-winning author of science fiction and fantasy. Current and upcoming book releases include, the Teadai Prophecies fantasy trilogy - Deadly Fate, Sage Truth and City of Gods, the Desert Magick paranormal series, and her young adult novels Breach of Worlds, The Mask of Tamirella and Quest for Freedom. Dana had the good fortune to study with Nebula Award-winner and science fiction author Sheila Finch and received her creative writing degree from California State University, Long Beach.


When she's not writing, she loves to read and travel. Just try to keep her away from ruins and old cemeteries. Dana lives in the Arizona desert with her husband and two insane birds, where she is currently writing another book. She invites readers to visit her website at  and her publisher’s website

Dana's Contest!
Go to Dana Davis' homepage
and email her from the cactus email icon in the left column
Contest ends March 5, 2010 at 12 AM MST
Contest Closed
Congratulations James!
Posted by Amber Polo at 12:22 PM 3 comments:

Email ThisBlogThis!Share to TwitterShare to FacebookShare to Pinterest
Labels: Dana Davis, Why I Write Fantasy 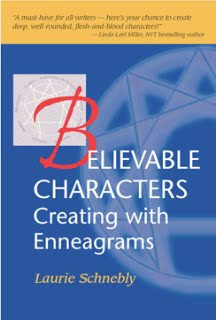 AMBER: Tell me how you became interested in using the enneagram for  character development?

LSC: My mother found a really simple book about enneagrams, complete with cartoon illustrations, and the minute I saw it I loved the idea of applying those personality types to characters in my books. There's just so much built-in conflict when you put any two types (even the same kind) together, and neither person has to be a jerk -- it works just as well when they're genuinely good people.

The idea is that when we're under stress, which of course our book characters ARE because otherwise there wouldn't be any story, we all tend to show the darker side of our usual strength. Each type has wonderful strengths, but those can also cause problems when they're taken to extremes...like someone carefree becoming irresponsible, or someone responsible becoming a perfectionist.

AMBER: As a long time fan of the enneagram, I’ve wanted to use the system to write a novel. Of course, I would use all the types and it would make perfect sense. Easier said than done. When is a good time to stand back, look at your characters, and do a personality analysis (if they let you)?
LSC: I'm always amazed at how many successful methods there are for developing characters. Some writers start with an archetype in mind and craft a plot to challenge that character; others prefer watching the plot unfold and THEN deciding what the characters will be like. Either way can work beautifully, and so can all the other ways in between.

For anyone who's not sure WHAT works best, my recommendation is: decide which comes more easily to you. Are you better at coming up with plots, or better at crafting characters? Then, whichever you're better at, do the other step first.

Because if plotting is tougher and you start with that, you KNOW you can create fabulous characters to fit any plot you dream up. And if you have a tough time building personalities, do that first (hint: enneagrams will help!) because once that's done you can always create a compelling plot for whatever people you come up with.

AMBER: I also notice that you teach a workshop entitled “Creating Your  Hero’s Fatal Flaw.” As a counseling therapist and romance writer, do you have tips for  making your hero and heroine flawed, but not too crazy for a reader  to care about?
LSC: Even though the term "fatal flaw" sounds so much more dramatic than "flaw that occasionally causes trouble," flaws don't have to be anything CLOSE to crazy! We're all flawed in minor ways, and those ways are enough to create drama and turmoil in our lives.

Of course, if novelists want to write a psychotic killer or something equally crazy, they can just pick one of those minor flaws and take it to extremes. In fact, the class gets into how each of the nine types could become a villain -- it's all about exaggerating the weakness that goes along with each type's strength.

But keep in mind, the strength and weakness are always two sides of the same coin. You can't have one without the other...all you can do is use that trait for whatever results you want.

AMBER: Anything else you'd like to add?
LSC:  Just in case anyone isn't familiar with enneagrams, here's the short version: we all have some of EACH type within us, but we also have one main type. (Some people recognize theirs immediately; others can see too many possibilities to decide right away.)

See how each strength has a corresponding weakness? That's likely to come out under stress, which happens in EVERY book. And that's only the beginning!

AMBER:  So, can you tell I'm a FIVE, observing and interviewing (and hiding out and writing), We also love information so I guess my career as a librarian also worked. Now, back to you. Tell me about your books.
LSC: Well, the one that got me here is called Believable Characters: Creating with Enneagrams   and...hmm, I'll bet you can guess what it's about. Then there's half a dozen romance novels written for Silhouette Special Edition
AMBER: What are you writing now?
LSC: Next will be a book on enneagrams in relationships, and it's funny how that idea started. When the book for writers came out, one of my few non-writing friends -- a guy I went through counseling school with, who's now in private practice -- read it and said "gosh, I could use this for couples counseling."

I'd never even thought of the enneagram types in that context, but the minute he said that it made perfect sense. (My parents, who've been married 50-some years, joke that they never really UNDERSTOOD each other until they learned about enneagrams.) So that's the next book...but I'm only a few chapters into it, and I hate to take time away from teaching to get that done!

AMBER: I agree with your parents. I didn't understand MY parents until I studied the enneagram. I think I understand the concept of personalities evolving for the better as we age (we hope). S Can an evolved character can have all the wonderful qualities of each type? And can a completely depraved character have all the worst?
LSC: Actually I don't think either one is possible, because there are so MANY wonderful (and worst) qualities for every type. But, sure, in theory someone could show a whole lot of good (or bad) traits of their type.

AMBER: What type was your great-grandmother Sedona Schnebly (for whom Sedona, Arizona was named)?

LSC: I wish I'd met her so I could say for sure -- she died shortly before I was born. (Although I've gotta admit that if I'd met her when I was six months old, it probably wouldn't have made any difference.)
Still, from everything I've heard about her, I'd guess she was a One. Everyone who knew her talked about how conscientious she was in terms of doing her duty. She was very involved in the local church, and people who rhapsodize today about the Sedona vortexes would leave her shaking her head in disapproval because she wouldn't hold with that sort of thing. But when she was dying, she asked her husband to go deliver a get-well card to an ailing neighbor. That kind of thoughtful, attentive care is typical of a Perfectionist who's dedicated to always doing the right thing. 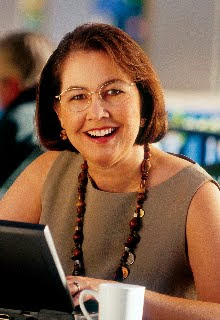 Laurie used to think there was nothing more fun than reading, until she discovered writing. Then, after winning "Best Special Edition of the Year" over Nora Roberts, she discovered something even MORE fun -- teaching other writers. She started with classes on synopsis-writing, which she'd always thought was easy because of her background writing ads. Psychology was next, because of her background in counseling. And when she discovered the nine enneagram types, she found those so useful that she wrote a book for people who want believable characters with built-in fatal (or not so fatal) flaws.

During weekdays, she writes and produces videos, brochures and commercials (some of which feature her voice) for a Phoenix advertising agency. For several years she would turn off her computer every day at five o'clock, wait thirty seconds, turn it on again and start writing romance.

Go to Laurie's website
to learn more about her books and workshops
And don't miss a peek at
Laurie's Journal Page
showing how Laurie develops a story.