Why I Write Fantasy - Forrest Hayes 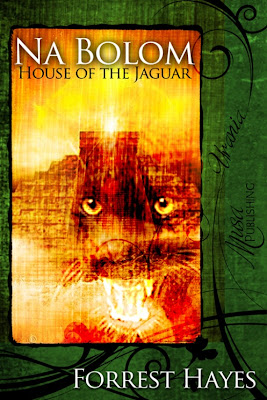 Forrest: I started writing about thirteen years ago when I had a little short story in my head that I felt passionate about. I sat down one evening and started writing the rough draft that is now Chapter 3 of Na-Bolom: House of the Jaguar. From then on I was hooked.  I didn't start out with the idea of writing a novel.  Just a three or four page story, then another, and another. I didn’t develop a storyline or outline for some time.  It sort of wrote itself. But, through the course of time, it became apparent that these seemingly separate stories were really just part of a larger one, and I began tying them together.   There was something about the story that was coming through me that was very compelling.  And it was this passion for this story that drove me on. Sometimes I would write for eight, ten hours day, and often past midnight.  At one point I was unemployed and wrote seven days a week for quite a few months. You might say I was obsessed, or possessed. So I guess, in answer to the question, why I write fantasy, is because of my passion for this story.  I had to get the damn thing out of my head.  :)

This passion was spawned many years earlier while reading the true life adventures of Ginger and Dana Lamb. Their travels through the jungles of Mexico in the thirties were very inspiring. They were self -proclaimed adventurers in search of a lost Mayan city in the jungles of Chiapas, Mexico.  They eventually found it along with a previously unknown tribe, the Lacondon. There were pictures in their book of the tribesmen - striking long, shaggy, black hair and clad in white tunics.

I was handed one of the Lambs’ books one day by a stranger while selling burritos on the streets of Juneau. I was a street vendor and he was an occasional customer. One day he just handed me the book and said he thought I'd like it. I don't know why he thought that. But he was right. He had checked it out of the library and said I could take it if I promised to return it to the library by its due date. That was in 1983.

That same year Alaska Airlines offered a round trip fare from Juneau to Mexico City for $100. Too good to pass up. So my girlfriend and I took off for Mexico that September and spent five weeks there.  Someone told us about the artist town of San Cristobal, high up in the mountains of Chiapas, Mexico, so we went there when we tired of the beach scene. We flew into a small town and then shared a taxi for the thirty-mile trip up the jungle covered hills to San Cristobal.  One of the other passengers was a museum curator from New Mexico and she told us of a place where we could stay that was very nice, and cheap, and safe. It was called Na-Bolom. We arrived at a large complex surrounded by a ten-foot adobe wall.  When we were let in through the large, hand-carved door, I immediately noticed the pictures of natives on the walls. They had long, shaggy black hair, and wore white tunics.

It immediately struck me that they were the same tribe I'd seen in the Lambs’ book that had been so mysteriously delivered to me in Juneau just months before. And now I had miraculously arrived right at their very door. It seemed to be divine intervention. The jungle was calling me. But why? The seed had been planted, but it would be years later before I would start writing.
Amber: Why the fantasy genre you chose?

Forrest: I probably answered this question above.  I wrote a fantasy story because I was driven to do so. It chose me. I didn’t choose it. There was a story inside of me that needed to come out. My next story may be an entirely different genre.

Amber: Why do readers love fantasy?

Forrest: I think we love fantasy because we have a need to explore.  Some of us live fairly mundane lives and our world becomes too predictable.  We need to stimulate that need for adventure, to explore, even if it’s from the living room couch. We need to search the vastness of our minds and discover what’s there, waiting to be discovered, and we can do that through one another. We are unlimited beings and fantasy has no limits.

Amber: Would you write fantasy even if no one reads it?

Forrest: Well, no one has read it! Not mine.  Not yet anyway.  This is the case for all new writers.  You have to write first, then see if anyone shows up for the dance.  Na-Bolom: House of the Jaguar is fresh off the presses, so to speak. So I still don’t know whether it will be well received or not.  So, I wrote for a decade not knowing if anyone would ever read it. That takes a certain passion.  So I guess the answer to that question is, yes. I would write even if no one reads it. I had the passion for this story, so I wrote it. But will I have it for another? We’ll see.

Forrest Hayes:
I sold burritos on the streets of Juneau, Alaska in the early eighties and later practiced as a certified massage therapist for ten years. I currently reside in Prescott, Arizona, where I sell insurance and write.  Na-Bolom: House of the Jaguaris my first novel.