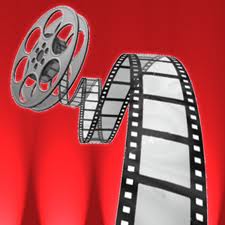 Don’t ask me why I’m working in this town that would be the perfect setting for “Our Town.” It’s nice enough, but there’s absolutely no entertainment. After graduate school I took the job of AV Librarian to earn some money for my move to Hollywood. I want to be a director. My friends tell me I should try for a job in one of the studio libraries, but I’m still building my resume.

Here in Shipsfeather’s Library I curate the audio-visual collections. That means I select the visual media of all types, except for except for audiobooks and juvenile titles. All the formats that you have to listen to or view with some kind of device are my purview. Movies, TV shows, documentaries, educational videos, and music. My department also has computers for DVD viewing and one very old microfilm reader for film not available in any other format.

Library Director Liberty Cutter is great. I mean she encourages me to plan film series programs and create montages of classic films. Without a movie house, the poor people of this town are limited to movies on cable TV and streaming movies to computers and other small screen devises, but that is so lame. I feel my special job here is to introduce the screen gems of the past.

As you might guess I spend a lot of time watching movies. Besides the movie channels on my big screen TV, I travel to Dayton and Columbus and even Pittsburg and Cleveland for film festivals. I have a complete personal collection of Michael Moore films.

One more thing -– You’d be surprised at Liberty’s taste in movies. She loves fantasy, as do a lot of librarians (I won't venture a guess about that). But she also likes some movies made for children like 101 Dalmatians. Most surprising is her obsession with Disney’s Shaggy Dog. She loves that movie. I mean loves. Before she purchased her own copy, she checked it out so often we had to replace the DVD. Everyone has their quirks. The characteristics that make movie characters interesting also make librarians interesting. And this library is filled with quirky librarians. Maybe I should write a script…

There is something odd in this town... Just whispers, but I think there are shifters around. Now, that sounds more like a Hitchcock film. Impossible. Who'd believe small town librarians were really dog-shifters?

As soon as the next season of Ohio film festivals is over, I’m sending my resume to Lionsgate.

Favorite Reading: 1001 Movies You Must See Before You Die and Steven Spielberg: A Biography, 2nd Edition.

Complete List of Characters
in
The Shapeshifters' Library Series

to learn more about Cecil's library, the dog-shifters, and the werewolf book-burners. 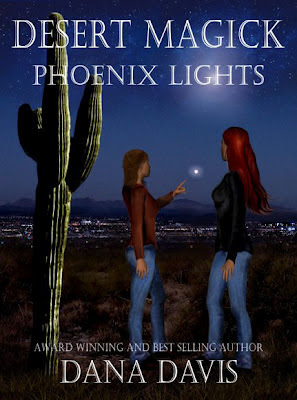 I asked Dana back to talk about the canine in her latest book Desert Magick: Phoenix Lights. Dana, Tell us about Perky!


Thank you for having me back, Amber. I’m excited to be here again.

Amber asked me if I would share a little about a particular character in my Desert Magick paranormal fantasy series and I’m happy to do so. He’s unlike any other characters in the series. He has no unusual powers and isn’t much good when it comes to fighting off evil, but he stole my heart the day he burst into the room as I was making notes and preparing to begin the very first book. I’m talking about Perky, Daisy’s little terrier mutt, a happy, scruffy little guy with brown fur, who is eager to please. Daisy’s husband Noah got him from a shelter when he was just a puppy and gave him to her for her birthday one year.

Now, I’ve written dogs into some of my other novels but never as a pet for any of my main characters. As soon as Perky showed up, I realized this was going to be a challenge, since having a pet means the characters can’t just run off and forget about him. Probably why a lot of paranormal fantasy characters don’t have pets or kids. I tried writing the scenes without him but he always showed up again, always under foot and looking for attention. He refused to go away so I had no choice but to accept him as another character in the series. Besides, I just couldn’t resist that little face that popped into my head each time he came around.

My main inspiration for Perky’s personality came from my best friend when I was growing up. When I was eight years old, my mother took me to a neighbor’s house for a surprise. There, I saw the most precious sight - A litter of new pups. I was thrilled when my mom told me to pick one out. They were all very cute but I chose the runt, the only male in the litter. I fell in love with him the moment I saw him all curled up next to his mother, so tiny even to my eight-year-old hands. When he was old enough, he came to live with us.

He cried the first few nights but eventually became used to his new home. I was a bit of a loner child with few friends, so my dog became my confidant and my best friend, someone who didn’t judge me or laugh at me. He was always thrilled to see me and could hardly contain his excitement when I came home from school each day. Although he liked my younger siblings, he was most definitely my dog. I fed and bathed him and he always chose to be with me over anyone else.

We played chase in the backyard. A few times he dug his way out and waited for me in the front yard. When I would get close, he’d run several feet away and stop and look at me again. We would repeat this several times before I caught up with him. Good thing I was a fast kid and able to leash him before he got into real trouble. Some days he sat next to me with his head on my leg as I read books on the old metal glider my grandparents had given us. Other times, we would lie on the picnic table and watch the stars together. I told him my troubles and secrets and he always listened. Always.

My precious pup lived for thirteen years. The day he died, I was devastated. I grieved for many years and felt guilty for a very long time that I wasn’t home with him that day. I was in college by then and very busy. I didn’t have much time for a dog so my mother took care of him. He came into my dreams often during those years, always happy and frolicking around, and I would wake up crying, heartbroken all over again. He’s been gone a long time now and doesn’t come into my dreams that much anymore, but I still think about him often and am grateful for the love and understanding he gave to that misfit child.

In a way, I’ve immortalized part of my beloved dog in the character of Perky. The fictitious pup who stormed into my series also has stolen part of my heart, and he appears in several scenes throughout each book in the series. I hope readers will see the love and happiness I had with my own dog in the way Daisy and Noah treat little Perky and the comfort he gives them after a hard day of fighting paranormal baddies. I’ve written Perky-poo into four Desert Magick books so far and he’s now part of my family, as well as Daisy’s.

Dana Davis is an award-winning and bestselling author of fantasy and science fiction and a paranormal investigator. She once worked for Hollywood and Disney. Genealogy fascinates her, and her ancestry includes Irish, Scottish, Dutch, British, and Mohawk Indian. She lives in Los Angeles with her husband and uses her varied background, along with family stories, to aid in her writing.

Enter for a chance to win a free PDF or ePub copy of the newly released Desert Magick: Phoenix Lights (Book 4). To enter, leave a comment and email addy (Use AT in place of @ to avoid spammers). Dana's family members not eligible.The winner will be chosen at random and must have an email address that accepts attachments in order to receive the prize.

Dana will notify the winner within one week of that date. Good luck!