Back in August I did an interview on The Library as Incubator Project blog. Their mission is to promote and facilitate creative collaboration between libraries and artists of all types, and to advocate for libraries as incubators of the arts.Their website features artists, writers, performers and libraries who exemplify the “library as incubator” idea as well as highlight resources that may be of particular use to artists and writers and provides ideas for art education opportunities in libraries with our program kit collection and practical how-to’s for artists and librarians.

Needless to say, their questions were not the usual ones bloggers ask. Thanks to them I needed to rethink the relationship between libraries and writers. Here's an excerpt from that interview -

Please tell us a bit about yourself (who you are, where you’re from, the type of work you did).
My first library job was in my fifth grade school library in Wisconsin. After I received my MLS from UW-Madison I worked in public, special, and university libraries all over the country and for library service companies building online catalogs and providing contract services. I’ve seen a lot of libraries from the inside.

What is/has been your relationship to libraries – as a reader, worker, and writer!
As a reader, writer, and researcher I’ve found each library a treasure of function and beauty. Now, as a full time writer and yoga teacher, I’ve become a library volunteer in a small town library and appreciate what a library building without a million volumes can offer.

Your book series, “The Shapeshifters’ Library” is set in/around a small public library in the midwest. Can you talk about how the library factors in to the series, and what inspired you to integrate the library so fully in to the story?

I wanted to write about libraries and tell a little about what goes on behind the scenes. And make it fun. In imagining The Shapeshifters’ Library series, I created two libraries, like Downton Abby, upstairs and downstairs.

The upstairs library is an appealing small town library, remodeled from an abandoned academy. Filled with brass, wood, and sculpture, the antique domed Shipsfeather Public Library also contains all the latest technology to serve the town. With a vampire look-alike YA librarian, a New Age chanting children’s librarian, and more, the community loves the staff and SPL does pretty well despite the town being run by library-hating bureaucrats.

In the levels below, traditional scholarly research librarians work tirelessly to discover clues to break the curse that locks them in. What makes these librarians a little unusual is that they are dog-shifters, descendants from an ancient race that have loyally worked as librarians and protected knowledge from their distant book-burning werewolf cousins. Though captive, they’ve created Zoogle an internet company bigger than Goggle, and a library services company able to install RFID codes that can track a book for miles.

I wanted to portray librarians as smart, resourceful, exciting, human, and most all dedicated. Notice, some dog-like characteristics. The werewolves, of course, are the villains. That’s my world and here’s my favorite quote:

Throughout history, just as many dog-shifter families are librarians, certain werewolf families destroy libraries. In whatever ways they can… Liberty [Cutter]’s eyes widened … She thought of all the negative librarians with minds closed to providing good service. “You mean every cranky, indolent, and downright nasty person who works in a library is a werewolf? That teacher in library school who turned every concept into an equation, the student assistant who mis-shelved the most popular books on purpose, and catalogers who create obscure subject headings? Bureaucrats who cut library budgets and hours? Parents who object to books containing any ideas not already in their own heads?”  (Released, 2012) 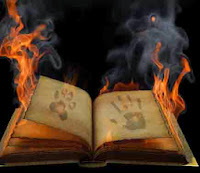 From a writer’s perspective, how do you think libraries can serve artists/writers even more effectively in their creative work?
All creatives need support, inspiration, and a venue. Libraries are in a perfect position to passively and actively supply all three. I am passionate about public art and feel permanent and temporary displays are needed in every library in some form. Passively, all libraries provide the research materials and media to explore creativity and support artists’ research needs. Actively, public libraries can provide a place for exhibits and invite artists into the library to offer programs to inspire children, teens, and adults to stimulate their creative souls. Programs by and for writers are a natural partnership. Also, I think the performing arts can have an exciting place in public library programing, especially in communities with limited cultural opportunities.


Writers often need “another place” to write. A place that’s not their home or a Starbucks’ corner. A place with comfortable chairs, quiet, wi-fi, and passable coffee. writers need access to the specialized worlds of research that the internet does not offer. And books. Art and history books and a depth of literary works, media, and databases unfold the heritage of the past and provoke dreams for the future. And staff to open all the doors.

As a writer, what would your ideal library look or be like?
My ideal library would have the quiet charm of an English manor house library (with more comfortable chairs), plus the excitement of a street fair, while providing the latest in technological access. It would have both an espresso machine and an Expresso Book Machine (for POD books), and an in-house café serving low cost healthy gourmet treats.

Amber Polo is the author of two Arizona romances, Relaxing the Writer (a book with lots of tips to help artists, readers, and even librarians relax), and a CD to teach anyone to relax and fall asleep faster than a boring book. Her award-winning Shapeshifters’ Library series is a cozy fantasy for dog lovers and library aficionados. Book 1: Released, Book 2: Retrieved, and  Book 3: Recovered.
Visit her website http://www.amberpolo.com/  to see floor plans of her imaginary library and find links to bios of some of her imaginary librarians.
Posted by Amber Polo at 12:58 PM No comments: 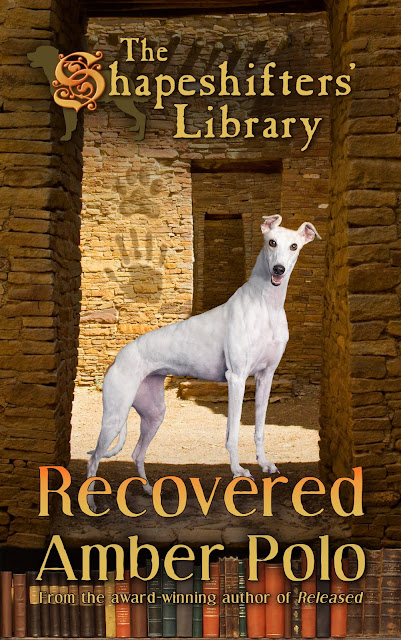 Don't you love the cover!

I never thought I'd write a series and here is number 3 of The Shapeshifters' Library. I love the characters and love staying in their world. Recovered is a little different than Released and Retrieved. The dog-shifting librarians leave their Ohio library and trek across to New Mexico to find the Library of the Ancients, chased by those book-burning werewolves, of course.

“A fantastic novel" --Midwest Book Review
From the award-winning author of THE SHAPESHIFTERS' LIBRARY series, RELEASED and RETRIEVED, comes the long awaited third installment!
Bliss D. Light was just an ordinary children’s librarian until one day she discovered she could grow a tail. Now her life is filled with more magic than any of the fairy tales she tells the children who gather at her feet at the Shipsfeather library. Like many of the other residents of Shipsfeather, Ohio, Bliss is a dog-shifter, and her newly discovered ability to change from human form into that of a sleek white greyhound has left her yearning to know more about her true heritage. The answer to all her questions, she is certain, lies with the dog-shifters’ long lost Library of the Ancients and, undeterred by the fact that thousands before her have searched, she sets out to find it.
Accompanied by her best friend Harry, a disgraced werewolf/dog-shifter mix, and hotly pursued by the evil werewolf team of Sybilla and Blaze, Bliss’s quest takes her across the sacred sites and ancient mounds of the American Southwest. Though kidnapped by dogcatchers, sold into racetrack slavery and forced to fight wolf dogs to survive, Harry and Bliss never lose sight of their goal—or each other. Because the only thing more important than finding the ancient lost treasure might just be preserving what they already have found: an unlikely love that could be the first step toward bringing two ancient enemy races together.

Did I mention I love reviewers?

And here's the roses I received from the Desert Rose Chapter of RWA for the three books in the series. 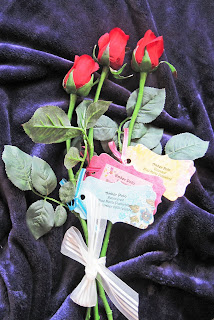