Those who know me know I'm no fan girl. Celebrities do not send me into a swoon.


This weekend I met Susan Orlean, author of Rin TIn Tin and The Orchid Thief, and I was thrilled. She appeared as part of Yavapai College’s Hassayampa Institute (I love that word) Literary Southwest series in Prescott, Arizona.

Besides her book about an iconic dog, there's more. The Orchid Thief was made into the movie Adaptation and Meryl Streep played Susan Orlean. Is that cool! Staff writer for the New Yorker. Contributing editor to both Rolling Stone and Vogue. Wow.

Orlean read from Rin Tin Tin and her work in progress about libraries. That should be a clue. Any writer who writes about dogs and libraries has my attention. She’s an amazing journalist and creative non-fiction author. You know the kind. You read their articles and their books even if you have absolutely no interest in the subject.

And now for the personal part. After I read Rin Tin Tin I heard Susan Orlean was writing about libraries sparked by her interest in the fire that damaged the Los Angeles Public Library in 1986 and destroyed 400,000 volumes – 20% of the collection.

Dogs, libraries, and book-burning. This former librarian and dog breeder was  seriously hooked. I sent her a copy of Released (dog-shifting librarians nose to nose with book-burning werewolves) and a few treats for her dog. And I received a thank you note. I think she and her dog appreciated the biscuits more than the book, but I was thoroughly impressed to receive a reply. And a fan turned into a fan girl.

Now, I’m waiting for her next book. 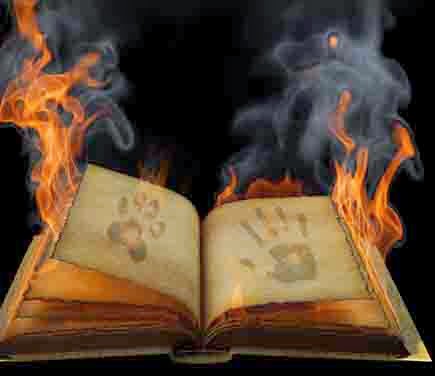