A Shapeshifters' Library series reader once called my books cozy fantasy. I loved the term and thought I'd invented a new genre (or the reader named an existing genre).

But cozy mysteries with canines have been around for a long time. I've been writing a review column for a dog magazine and have been reading a lot of canine cozies and thought I'd share some of the reviews. 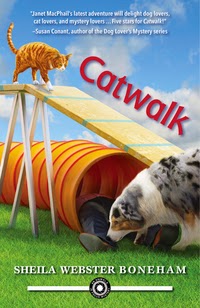 Animal photographer Janet MacPhail competes with Jay, her Australian Shepherd, in canine agility.  The mystery begins when a dead body is found in the agility course’s crawl tube. In addition to believable and oh so funny insights into the dog world, Janet, our 50-something menopausal heroine, deals with her mother in a nursing home, her boyfriend, and her mother’s boyfriend, as well as a feral cat problem.
Janet also trains and competes with her cat in feline agility. Who knew feline agility was even a sport – and fun for owner and cat?
I loved the combination of dog/cat information, mystery, and a women’s real life issues. Read it for the animals and the laugh out loud porta-pottie Iditarod scene!
Sheila Webster Boneham, award-winning author, has written seventeen nonfiction books about dogs, cats, and rescue and founded rescue groups for Aussies and Labs.
Both mystery series left me begging for more.
Muzzled
Eileen Brady
Poisoned Pen Press, 2014 (a Kate Turner, D.V.M. Mystery) 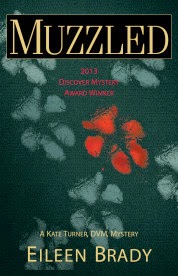 From the moment Dr. Kate rescues a hamster from a vacuum cleaner you know this mystery will be filled with animals and laughs. When she visits Cavalier King Charles Spaniel breeders and discovers two dead bodies and 27 blue-ribbon dogs running wild, you know she’s going to stick her nose into crime solving. While police suspect murder-suicide, Dr. Kate disagrees. Was the couple murdered for the money their champion dog could bring to another breeder? As Kate's veterinary house calls continue, so does her varied list of suspects-including a tattooed biker baker.

Pet lovers and mystery lovers will find this a cozy choice. I loved the humor, the mystery and a peek into a veterinarian’s life. Plus who could resist a vet’s view of quirky pet owners.

Eileen Brady is a veterinarian living in Scottsdale with six cats and two dogs of her own. 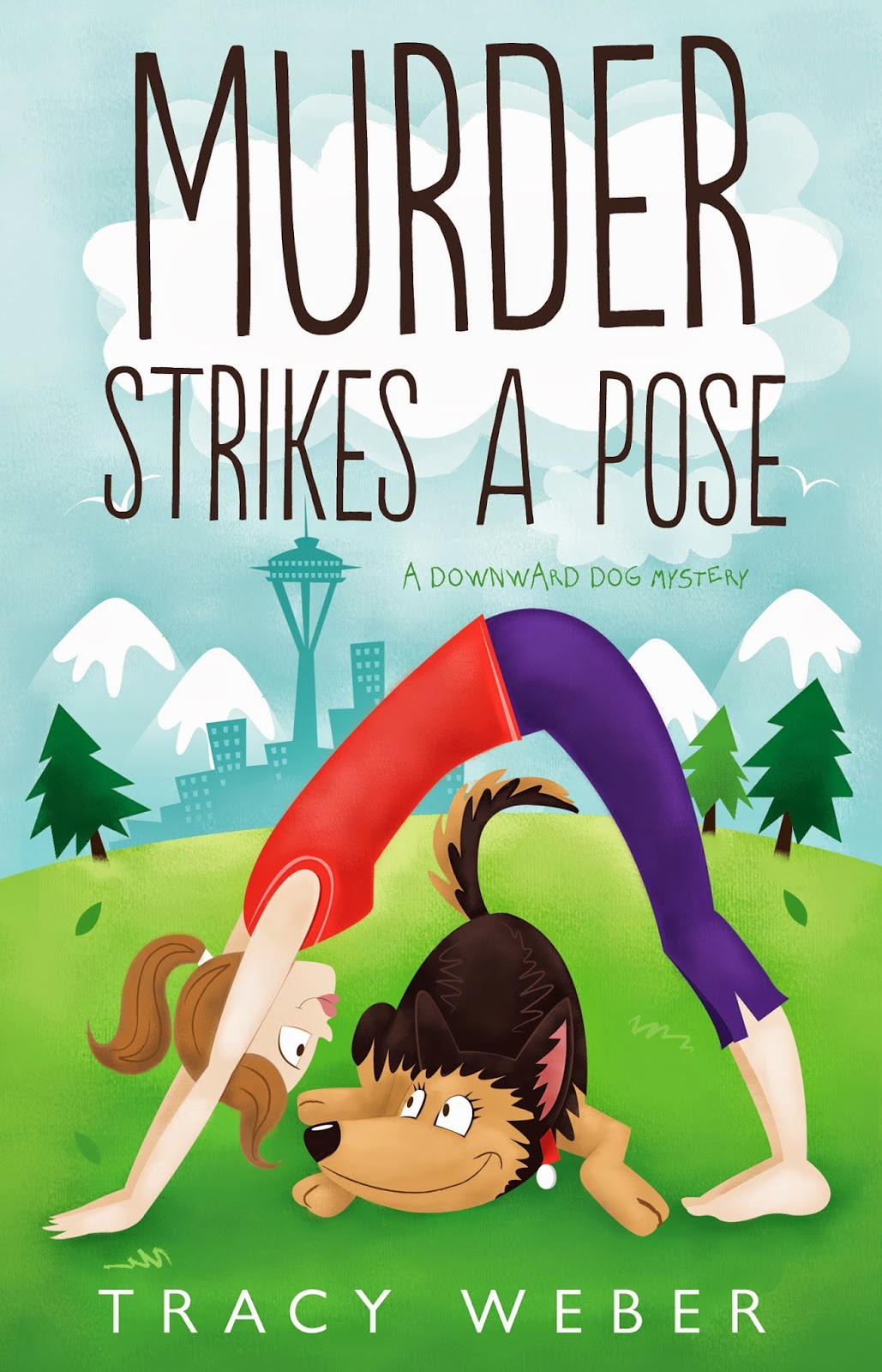 When George, a homeless alcoholic and Bella, his German Shepherd, disturb the peace outside Kate’s yoga studio, she loses her Zen-like calm. The three form an unlikely friendship until Kate finds George’s body behind her studio and tries to find a home for Bella.

Yogi Kate and Serenity Yoga are not always serene but always delightful. A mystery from a yoga studio owner who knows the behind the scenes work and a dog lover not afraid to deal with real problems. I appreciated that Bella had serious issues with EPI (exocrine pancreatic insufficiency) and, for a change, wasn't smarter than the sleuth.
Tracy Weber, yoga teacher and founder of Whole Life Yoga in Seattle, shares her home with challenging yet amazing German Shepherd Tasha and a bonito flake-loving cat. 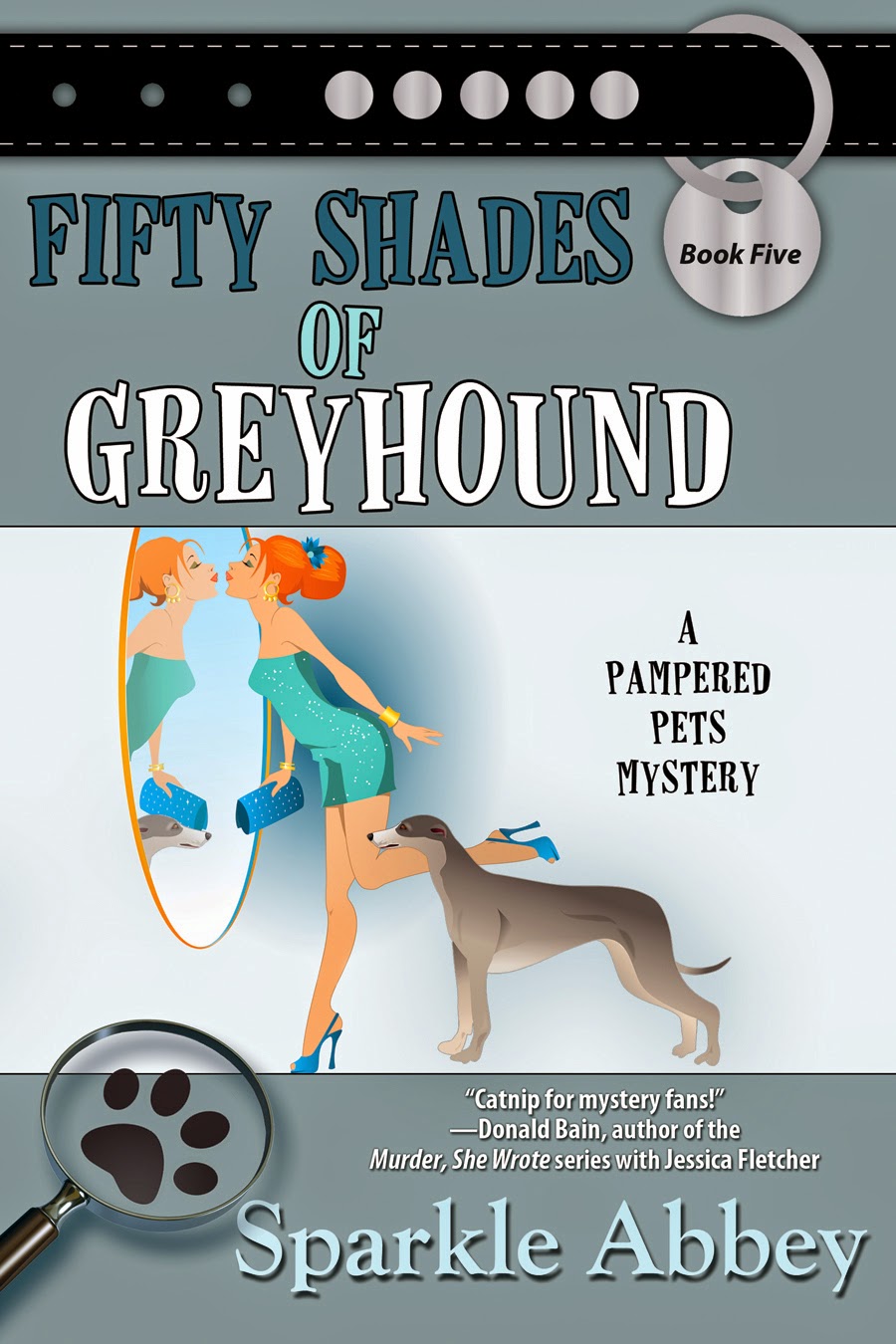 Fifty Shades of Greyhound is California’s premier rescue group charity event, graced by fifty greyhounds. Smart, savvy but ditzy Caro Lamont, Laguna Beach’s pet therapist, loves animals and designer clothes and for the fundraiser gala Caro and society couples put on the dog dressed in shades of gray. All is champagne and big checks until a dead body spoils the party.

Of course things get worse for the rescue group. Caro butts in and the results bounce between humor and danger. Before the perfect ending, enjoy the Laguna atmosphere, a tiny bit of romance, nutsy pet people, and a cozy mystery that will keep you guessing. And who will end up with Grandma Tilly’s ugly brooch? 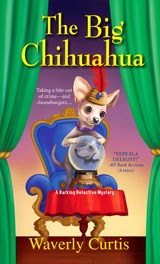 P.I. Geri Sullivan and Pepe, her fast-talking Chihuahua, (sadly only Geri can hear him) look for a missing woman and stumble into a New Age retreat staffed by Leaf and Artichoke, where cult devotees worship the incarnation of Dogawanda.

Before Geri can say "Dog Be With You," or "Obey Your Alpha," Pepe is tapped as their new guru, and takes the name Towering Cedar. It wouldn't be a mystery without a body or two. Throw in some wolfdogs, an enigmatic celebrity, and Pepe's clever dialog and the result is a silly satire mixed with mystery and mayhem. A delightful cozy read to cuddle with.

Waverly Curtis is the joint byline of mystery writers Waverly Fitzgerald and Curtis Colbert. Fitzgerald lives in Seattle with her daughter and her daughter's Chihuahua, Pepe. The authors donate part of the proceeds of the book sales to the ASPCA.