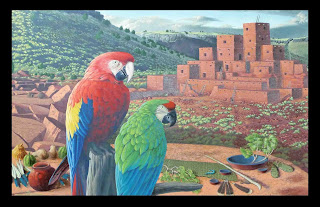 After hundreds of years Scarlet Macaws can again be seen at the ancient pueblos of the Verde Valley. Their dazzling feathers catching the sun under the Arizona skies. 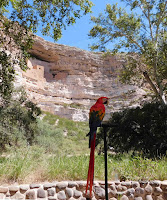 Remains of macaws have been documented in early archaeological excavations at both Montezuma Castle and Tuzigoot National Monuments. The birds were traded into the Verde Valley from hundreds of miles south in modern day Mexico. Substantial numbers of macaws were identified at Pueblo Bonito (Chaco Canyon) and Wupatki at least as early as 1,000 CE. The earliest date for Chaco (Pueblo Bonito) is approximately late 8th century to early 9th century. The date for Wupatki is approximately 1135-1195.

At the age of five Kelley Taylor, founder of Sacred Scarlets, wrote a letter to Santa asking for a parrot. But she didn’t receive her first birds, three goldfinches, until her sixth birthday. Kelley says, her lifelong companionship with birds has "brought decades of joy, adventure, knowledge, and fun. I feel compelled to share this gift with the world through Sacred Scarlets and my beautiful Scarlet Macaw companions, Sedona  Rose and Bonita."

After a career in photography and working in Italy, Kelley adopted several large parrots and began to foster, rescue, rehab, and re-home others. Returning to Arizona she pursued her interest in the thick-billed parrots who once lived in the "Sky Islands” region of southeastern Arizona, southwestern New Mexico, and northwestern Mexico.  She's visited parrot sites in Mexico, volunteered with the Arizona-Soronran Desert Museum’s Raptor Free-Flight Program, researched the Scarlet Macaw in archaeology at the University of Arizona, and worked with parrot rescue organizations in Arizona. In 2010 Kelley founded Sacred Scarlets, now a 501(c)3.

Vivid red, yellow, blue, and green feathers make Scarlet Macaws the most brilliantly colored creatures on our planet with their unique red hues spanning ultraviolet to red. Scarlet Macaws are:
Conservation and Education 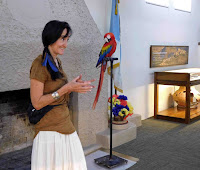 The birds of Sacred Scarlets serve as ambassadors for the protection of birds in the wild while acting as brilliant examples of macaws in the history of the American Southwest culture.

Macaws molt and feathers are replaced regularly. Kelley donates feathers to Hopi carvers for their kachinas.

Kelley facilitates rescue with fosters and sanctuaries and urges all potential parrot owners to learn about these intelligent birds before obtaining one from a reputable breeder or rescue.  Macaws mature slowly and require a deep commitment to the human-bird bond and long-term responsibility in attention, nutrition, and behavior training. Kelley is available to consult on parrot training and behavior problems.


See the Sacred Scarlets birds and hear about Scarlet Macaws and their history: