Why I Write Fantasy - Kari Thomas 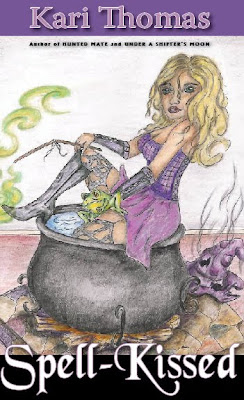 Amber: Welcome Kari Thomas, paranormal romance author who adds a touch of humor to her fantasy. Tell me, Kari, why do you write fantasy?
Kari: WHY? Because I’m insane. Okay, before you shake your head, think about it. Authors spend a large amount of their time writing. We end up living in the world(s) we create, and sharing countless experiences with our characters. Contemporary writers get the opportunity to “live in the here and now, real world” with their characters. But, a Fantasy writer? Nope. Imaginative worlds, weird and intriguing characters, and anything your crazy brain can create. In an author’s Fantasy world, you can escape from reality for a short time.


Amber: Tell me how humor and fantasy work together for you.
Kari: I love adding humorous moments to my stories. Writing humor into fantasy is always a good way to break up the constant darkness that the plot has to have.  Spell-Kissed's heroine is a bumbling witch whose spells go wrong every time her emotions are involved while spell-casting. Imagine her chagrin when the oh-so-secy hero affects her constantly.


Amber: Why do you think readers love fantasy?
Kari: For the author and for the reader, Fantasy brings limitless possibilities you can only dream about, and proves that the Magic of Love has no boundaries.

Amber: Would you write fantasy even if no one read it?
Kari: A most definite YES! I write what I love to read, and to be able to create and control my own fantasy worlds is something I couldn’t give up --- even if no one else ever read it. It’s that “insanity” part of me!

And it’s FUN! Imagine living in a world where sexy Shapeshifters, intriguing Vampires, heroic Angels, and even mysterious-but-hunky Demons roam. Imagine being able to create AND control a world that brings your reader into it like a willing captive and keeps her there as she experiences every thing that happens in this Fantasy. I write what I love to read, and it’s a great feeling to be able to share

All of my paranormal romances are unique and different from the norm. Sure, I have incredibly sexy male heroes and brave heroines, but I write each book with plots that you won’t find elsewhere.


Want a hero that is half Angel and half Demon? HER HEART HIS SOUL has Drake who fights an inner battle against both his natures.


Want a hero that is so Alpha Wolf Shifter that he doesn’t know the word “no”, and only concentrates on his “prey”? PREY FOR THE WOLF has Kane who sets his prey-sights on his brother’s fiancé.


What about a Cougar Shifter who is the head of a household of unique and various species shapeshifters? You’ll find sexy Aiden in TEMPTATION UNLEASHED.


Want the ultimate hero who tries to put Honor above his own wants and needs, his uncontrollable lust? Logan in HUNTED MATE is that hero! How about a sexy cowboy-turned rancher who is all male-sexy --- but vows to never allow love into his life again? 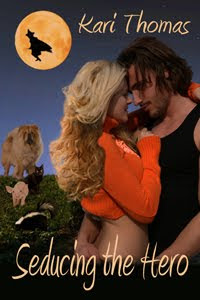 In SEDUCING THE HERO, poor Colt doesn’t stand a chance against the feisty witch heroine, but he’s going to try and resist as long as he can!


And, in UNDER A SHIFTER’S MOON there’s Lyon. A too-sexy-too-Alpha-for-his-own-good hero who has to make a fateful decision that will either destroy his Jaguar Pride or kill the woman he loves.


Who wouldn’t love spending time in those worlds, with these characters? Okay, maybe you have to be a bit insane too, like me, but hey … it’s FUN! And that’s why I write Fantasy!

Amber: Thanks Kari, for taking time from your fantasy worlds to visit Wordshaping.
Kari Thomas lives in Northern Arizona, and divides her time between taking care of her dad and writing. When life gets overly hectic she retreats into one of her fantasy stories.
Kari has eight paranormal romances and two shorts published. She knows there is no cure for insanity, so it appears she is destined to continue writing fantasy stories for years to come!
Kari's latest release is HOLD ONTO THE NIGHT from All Romance Books. It's a hot short contemporary romance(in ebook format only). Proceeds to benefit the American Heart Association.
To learn more about Kari’s worlds visit her website!
Kari's Contest
To win a pdf copy of HOLD ONTO THE NIGHT,
leave a comment answering the question:
"What 3 awards did Kari win on one day?
(See her website.)
Posted by Amber Polo at 1:35 PM

Email ThisBlogThis!Share to TwitterShare to FacebookShare to Pinterest
Labels: Kari Thomas, Why I Write Fantasy