Why I Write Fantasy - Zenobia Renquist 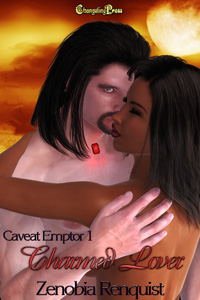 Welcome Zenobia Renquist, fantasy author who makes her characters work for their happily-ever-after!

Amber: Why do you write fantasy?
Zenobia: The only limit is my imagination. I can make the world what I want it to be, rather than limiting myself to the rules of reality. I love world-building. Creating a civilization and introducing it to my readers is my idea of fun.

Amber: What are your inspirations? What fuels your imagination?
Zenobia: I'm an avid anime/manga fan. I love the art and stories that come out of Japan. The way the Japanese handle plot and story creation has influenced the way I write in a big way. I'm also a comic book fan from way back. I still watch cartoons and love watching most fantasy movies and TV shows that cross my path.

Amber: What are your favorite fantasy novels?
Zenobia: Harry Potter series by JK Rowling, Brotherhood of Blood series by Bianca D'Arc, most everything from Stephanie Burke, and I'm finally starting the Dragonriders of Pern series by Anne McCaffrey (yes, this one has been a long time in coming).

Amber: Why do you think readers love fantasy?
Zenobia: I imagine fans of fantasy like it because things out of the ordinary happen all the time. People can fly, vampires exist, characters can change the flow of the world by simply making a wish. Anything is possible so the story is only limited by the authors imagination.

Amber: Would you write fantasy even if no one read it?
Zenobia: Most definitely. It gives me the ability to exorcise real life demons and acts as a nice stress relief when I put my characters through literary tortures before letting them get to their happy ending. Most of all I would continue because I like reading my stories. I still can get sucked into my own books and want to know what comes next even though I wrote them and know what comes next. 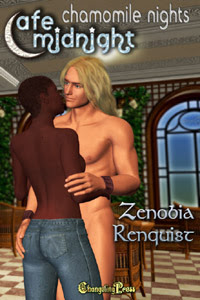 Whether as D. Reneé Bagby or Zenobia Renquist, Reneé lives in her imagination. When not traveling through her fantasy worlds, she can be found in MD living with her husband and two cats. She is an Air Force brat turned Air Force wife, which means she’s accustomed to travel and does it whenever possible (so long as she doesn’t have to fly). Her favorite pastime is torturing her characters on their way to happily-ever-after for the enjoyment of her readers.
On the few occasions her muse flees the scene of the crime, Reneé likes to read (comics, manga, and romance), go to the movies, play a few levels of whichever puzzle game has hijacked her interest or experiment with a new chain maille weave.


BOOKS BY ZENOBIA RENQUIST
Cafe Midnight: Chamomile Nights (Changeling Press)
Patrice is the backbone of her company. She's never met a problem she can't conquer, except her stress. She's stretched to the breaking point until she finds Café Midnight. Her waiter serves up a cup of relaxing tea with hot passion on the side. She's found a way to truly relax, but is she willing to let her sexy waiter serve her at home?
Caveat Emptor 1: Charmed Lover (Changeling Press)
It's only a matter of time before someone figures out Ryver and Theron's secret. With the threat of mages bearing down on them, Ryver has to decide if she's willing to give up her vampire lover -- or her freedom.
Buy Link:
Coming 10 June
Caveat Emptor 2: Trapped Lover (Changeling Press)

Now living in vampire territory, Ryver is learning more and more about Theron. Not all of it is good. The more she sees, the more she's convinced that the man she fell in love with, the man who can make her body sing with a single touch, might not be the man she thought he was. What's worse, there's no way to get away from him if he's as bad as she suspects.
Learn more about Zenobia at her Website
& Renee’s Blog
Zenobia's Contest!
Leave a comment for a chance to win an ebook copy of
Caveat Emptor 1: Charmed Lover.
Posted by Amber Polo at 1:22 AM