Why I Write Fantasy - Ariana and Mythpunk 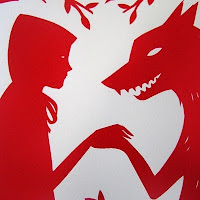 Why I Write Fantasy by Ariana and Mythpunk


Yesterday I visited my thesis supervisor. We chatted for a little while about writing and my plans for grad school, and some of my faculty's upcoming writing contests. He asked me if I've written about "anything that could possibly happen to someone living here in this city." I thought for a moment, and then I said no.

He chuckled a little, and then he asked, "What started your love affair with fantasy?"

I thought about it for a second, and then I told him a few stories.

When I was a little girl, just four or five years old, I never played with Barbies or dolls. I had a variety of plastic animal figurines, and I'd spend all of my time outside, playing with them in the grass and dirt. I was a bit of an animal geek, and spent all my time reading animal encyclopedias. I was fascinated by what I read. There was never enough information for me.

My favourite animals, though, were wolves, bats, rats, lions, and poison dart frogs. When I would go to sleep at night, I'd sleep with a black plastic rat and a plastic bat, both of which squeaked, and had red eyes.

"You could be a witch," my supervisor said.

Then I told him this story.

When I was six, I wanted a pair of antlers. Not fake antlers. Real deer antlers. I needed them. To be honest, I am not sure why I wanted them so badly. But it was a deep, visceral need in me. I wasn't quite happy with being human. My dearest wish was to be a wolf. But deer antlers would have to do in the meantime.

Well, I got them for Christmas. Real deer antlers, two lovely spikes with three tines on each, jutting up from a small triangle of skull. That cemented my belief in Santa for several more years. I would hold them to my head rapturously and gaze in the mirror, imagining having them for real. It was only a few years ago that I learned how I got them.

My parents went to my grade one teacher, saying, "Help us, Ariana wants deer antlers in the worst way, we don't know what to do, our daughter is really weird."

And my teacher's brother was a hunter, and she got him to save the antlers from the next deer he killed for me. He cleaned them up and sent them to my parents. Reason #295 why my parents are amazing.

Of course, I am not mentioning how much I loved fairy tales and mythology as a kid. I had a book of Greek myths, countless fairy tale anthologies and stand-alone stories, and an endless amount of imagination. In my mind, animals always talked, and the wind was a goading force that tempted me away from home, and I'd kiss trees affectionately because I was happy they were alive. I was happiest when I imagined I was flying, a Swan Maiden, part-cat, part-wolf, magical, a Faerie, transformative.

I've never been satisfied with reality.

As I got older, and Pretend wasn't always a viable game, I read more and more. My favourites? The Golden Compass, The Sight, Harry Potter. They opened up my mind to even more possibilities. They were my games of pretend come to spectacular, beyond-my-imagination life.

Even now, I find it hard to describe what my mind is like. It's full of stories, and wishes, and garnets and grease and cinquefoil and tea and silk and shadows and bones and feathers. I add narratives to everything around me. My highest aspiration is to live a life that can match my dreams. The wind still tempts me away from home.

I couldn't stop writing fantasy if I tried. It's a part of me, in the way that antlers are not.

Email ThisBlogThis!Share to TwitterShare to FacebookShare to Pinterest
Labels: Mythpunk, Why I Write Fantasy