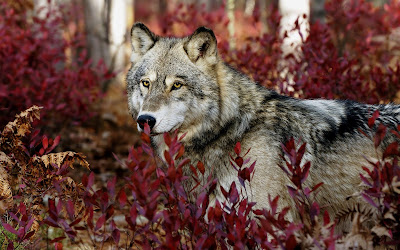 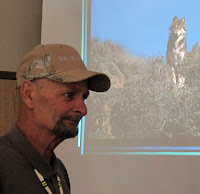 Bill Chamberlain has over twenty-seven years of experience dealing with wolves and wolf hybrids on a daily basis. He is certified in assessing and evaluating animal behavior and has done extensive studies and research into wolf and wolf-hybrid behavior.
I met Bill at a presentation in Arizona. Not only did he talk about the work he's doing with wolves and wolf-dogs but he explained the history and evolution of wolves, wolf behavior, recovery programs, and the reintroduction of the Mexican gray wolf into the wilds of the Southwest. The U.S. Wolf Refuge  facility in Nevada presently has 16 wolves and hybrids, some for possible adoption and others are there in their forever home.

United States Wolf Refuge
The U.S. Wolf Refuge is in existence to promote and protect the welfare of all wolves and wolf dogs throughout North America. Their overall goals are to return the wolf to its rightful place within our ecology and to promote healthy and harmonious relations between man and wolf dogs.

They believe virtually all recent tragic incidents involving wolves and wolf dogs have been a direct result of humans dealing ineffectively with the wolves. If wolf and wolf dog behavior is understood and properly dealt with, man's relationship with them will be happy and harmonious. The U.S. Wolf Refuge is dedicated to this belief.

It is the belief of the U.S. Wolf Refuge that wolves are wildlife and belong in the wild as is naturally intended. Those who oppose the mere existence of the wolf must understand that the wolf is an absolute necessity to the natural balance of any ecosystem. Those who revere the wolf and make it out to be something greater than it is must understand the same thing. The wolf is simply a piece in Mother Nature's delicate and complicated puzzle. 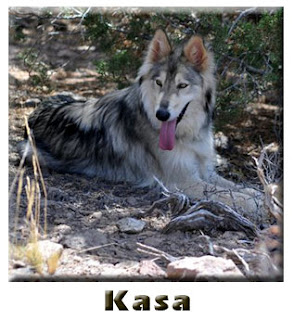 Bill was accompanied by Kasa (Hopi Indian for "dressed in furs"), a 3 year old Wolf-Dog that was rescued from a California animal shelter after her owners lost their home to foreclosure. In most California cities any dog that is suspected of being a wolf mix is not eligible for adoption and either must be pulled out by an authorized rescue organization or is automatically euthanized. When her owners surrendered her they classified her as a Wolf-Dog. A volunteer from the U.S. Wolf Refuge was fortunate to have received a call from the animal shelter and was able to "rescue" her before she was euthanized.

Kasa has a wonderfully friendly disposition due to being raised with children and other animals. She has become an Ambassador Animal and goes to many public events.

Besides the plight of wolves, Bill is an expert on wolf-dogs. He says, "wolves and wolf-hybrids are magnificent animals that many see as a status symbol."

Bill's organization takes in and finds homes for wolves and wolf dogs that are socialized enough to adjust to a new pack/family without significant trauma. This is a complicated and delicate process in that it requires an in-depth assessment of the animal as well as the people who are willing to bring such an animal into their home and into their lives. Bill has written a Placement Guide. He told me the his Adoption Questionnaire is exceptionally thorough. When I asked him about the success rate of wolf-hybrid adoptions from the U.S. Wolf Refuge he said only one had been removed from a home. He felt this was because the placement process was tough.

I also asked Bill about DNA testing to determine if an animal was pure wolf or wolf hybrid. He said that at this time that is not possible.

Learn more & gain more insight by reading "Find Your Wolf a New Home" by Bill Chamberlain. And Download the Adoption Questionnaire and / or the the Adoption Agreement.


and wolves and wolf-hybrids
and assist their work.

Choose a wolf or wolf-dog to
sponsor for one year
in their "Adopt-A-Wolf" Program.
Posted by Amber Polo at 12:30 AM