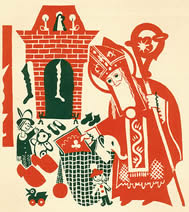 When I was small Christmas, Santa Claus, Father Christmas, and St. Nick were all mixed up – but it didn’t matter.

Wikipedia says:
In Northern Germany, Sankt Nikolaus is usually celebrated on a small scale. Many children put a boot called Nikolaus-Stiefel outside the front door on the night of 5 December. St. Nicholas fills the boot with gifts and sweets overnight, and at the same time checks up on the children to see if they were good, polite and helpful the last year. If they were not, they will have a tree branch in their boots instead. Sometimes a Nikolaus impersonator also visits the children at school or in their homes and asks them if they have been good (sometimes ostensibly checking his golden book for their record), handing out presents on the basis of their behavior.

Here’s what I remember. When I was a young child, St. Nicholas Eve was the start of the Christmas season.

Everyone in the family hung stockings. The socks my brother and I wore were much too small, so my grandmother donated her long baggy cotton stockings.
I don’t remember really big gifts. Everything had to fit in the stocking. But there was always an orange in the toe (which made the stocking really long and funny looking) and some candy. Maybe there were small toys. I think the excitement was more important than the gifts. Gifts and surprises weren’t ordinary. And little things meant more. (And Christmas meant big presents.)To awake to find a bulging stocking was pure magic.

It fits the Northern German tradition. Stockings instead of boots. And St Nicholas as the beginning of the annual “be good or Santa will bring you coal” time of year. Behavior was very important. I also remember threats that bad children could get a switch (ah the old tree branch).

I’m not sure when we stopped hanging St. Nicholas stockings, but we never hung stockings on Christmas Eve and I always wondered why anyone would do that. Sadly, I think in my family the St. Nicholas traditions disappeared because they didn’t fit the melting pot American Santa Claus images. 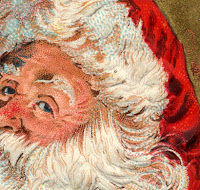 * The perverted story “Six to Eight Black Men” by David Sedaris in Holidays on Ice  provides politically incorrect outrageous holiday laughs at the expense of Saint Nicholas in the Netherlands.
Read the story online - originally published in Esquire  Or listen to Sedaris read it at Carnegie Hall on YouTube

For a more delightful version of St. Nicholas Eve as celebrated by the dog-shifter librarians of Shipsfeather, Ohio read the Wassail Excerpt and the St. Nicholas excerpt  posts. December 4 and 5.