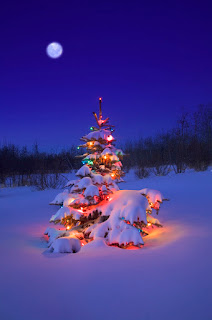 Something magical happens in Sedona every December.  Well since it’s Sedona, let’s say something more magical happens in December.  Along Highway 179, between Bell Rock and the Town of Sedona, Christmas trees appear along the road.  They just appear.  One day they’re not there and the next morning they are.  Not ordinary Christmas trees, these are heavy with thick tinsel garlands and bright round balls.  Each tree is different but they all seem to be decorated in the same style, as if there were a plan.  This year among the reds and greens, silvers and golds, and purples and blues, there are many covered with red, white, and blue garlands and ornaments.

Since the trees appear on Coconino National Forest land where federal regulations require visitors to stay on the trails, decorating trees isn’t allowed.  It is rumored that families sneak along the road late at night with boxes of decorations, but that rumor is harder to believe than magic.

Wherever these magic trees come from, they disappear as mysteriously as they appear.  On New Year’s Day there are no trees.  If you look carefully you might find a few shards of a red or silver ornament or a bit of glittery purple tinsel, but the trees are gone.  The red rocks and the green trees are still there and still magnificent, but they seem a little drab for a few days. 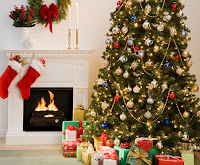 I wrote this in 2001. Since then the trees don't appear. The nature-loving people of Sedona have stopped decorating forest trees for fear birds will be attracted to the glittering decorations, eat, and die. So let's keep our trees indoors or with animal friendly decorations.

To see photos of the not so-magic tree in Old Town Albuquerque
see my 2014 post.
Posted by Amber Polo at 10:41 AM