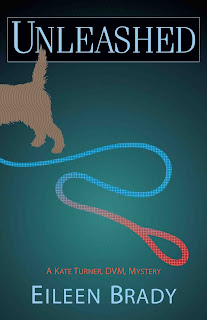 
Kate Turner, working as a veterinarian in an small house-call practice, learns one of her clients has committed suicide. Dr. Kate refuses to believe her artist friend, with much to live for, would have killed herself leaving her Cairn Terrier Toto in the animal hospital with no instructions. Animal lovers just don' t do that.


Dr. Kate continues her house calls, nosing around and sniffing out information from the town gossips and uncovers a lot of suspects. When a gentle employee of her animal hospital is arrested for the murder, she refuses to butt out, although her sleuthing irritates police officer and friend Detective Luke Gianetti.  With some practical advice from her Gramps, a retired fire investigator, now residing in assisted living, she pushes on.


Colorful human characters and interesting animal clients, perhaps borrowed from the author's own experiences as a vet, make it fun to follow the clues Dr. Kate and her friends dig up.

Humor and a heartfelt love of animals combine in this well crafted cozy for animal lovers.


Eileen Brady is a veterinarian living in Scottsdale with six cats and two dogs of her own. 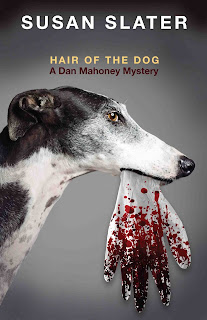 
Life really heats up for insurance investigator Dan Mahoney and his PI-in-training fiancée when they arrive in Florida to look into the deaths of five valuable racing greyhounds. Of course, all is not what in seems with the fire, a dead body, and a gentle caretaker arrested and charged with arson and murder. As Dan and Eileen settle into temporarily cozy life near the beach, their Rottie Simon joins them, and Dan’s mother adopts a greyhound and prepares to purchase a house with her new boyfriend.


A well done mystery filled with as many surprises and subplots and a twisty racetrack. There’s lively banter and humor as Dan’s mother wants Eileen to investigate her mysterious fiancé just as the plot picks speed up.


Greyhound adoption issues are handled well. providing a lot of information about racing dogs prepared for rehoming in prisons, a greyhound protection organization, and the transport of dogs getting their second time around. I was surprised that some dogs were trained for agility in prison. I’d love to see that.


Note: Hair of the Dog does not contain racing horror stories. Slater even includes a request to donate to a group that transports retired racing greyhounds.


Susan Slater is the author of the Ben Pecos Indian series and the Dan Mahoney Mystery series. A college writing instructor, she now lives west of Taos, New Mexico.
Posted by Amber Polo at 9:24 AM No comments: 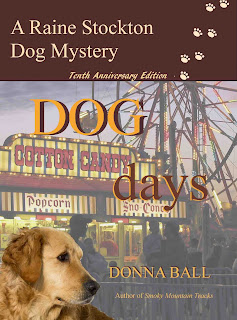 
Dog Days celebrates the tenth anniversary of The Raine Stockton Dog Mystery series. Filled with a a big dose of suspense, believable characters, and the beautiful Great Smokies, each mixes serious issues with page turning mysteries.


If you like to read series in order, begin with Smoky Mountain Tracks. If you don’t care a doggy rawhide, jump into Dog Days. Or try Home of the Brave. All ten feature Raine Stockton and her Golden Retriever Cisco. In the first book Cisco starts out as an incorrigible two year old pup and by book ten has grown into an incorrigible three year old dog. Besides keeping the reader up to date with Raine’s life, I believe Ball does this so she can write books where dogs never die.


Though Cisco still has his silly moments, by Dog Days he has become a reliable tracking dog and obtained his Level Two Wilderness Certification. Raine’s kept busier than ever with her Dog Daze Boarding kennel, grooming and dog training facility. Now divorced, she struggles with a new boyfriend in her life, a bond with his daughter, and wacky kennel help.


Raine and Cisco assist local police with search and rescue operations and, like all amateurs who star in mysteries, Raine gets into more suspenseful and often dangerous trouble than the average dog owner. Cisco shares the pages of Dog Days with a couple of Australian Shepherds and a beautiful English Cream Golden Retriever, lost in the mountains, and possibly a clue to a murder. If you like your mysteries with a dog on every page, you’ll love Raine and her friends. 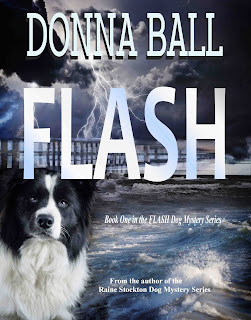 
Flash, the debut volume in the Dogleg Island Mystery series, features humans as interesting as the dog, which is saying a lot. Dogleg Island is not as cozy a read as the Raine Stockton mysteries, since heroine Aggie Malone is a small town police chief with murder as part of her job. Flash builds at thriller pace right up to the climax. Aggie, with a bullet lodged in her brain is both as delightful a heroine and as complex as Raine. Aggie and her island felt so real I was sure if I looked at a map, I’d find it right off the coast of Florida. And let’s not forget Ryan, Aggie’s lovable surfing cop boyfriend.


Flash, her black and white blue-eyed border collie is super smart. Border collie Flash's point of view was perfect, obviously written by a dog lover who knows border collies and how to keep readers turning pages. All Ball’s characters felt like real “characters” I’d meet on a Florida island. And by the end, Flash, Aggie, and Ryan felt like new friends I’ll look forward to meeting again.
Donna Ball is best known for her Raine Stockton Dog Mysteries, plus two heartwarming women’s fiction series: Ladybug Farm and The Hummingbird House. And for fans of fantasy she’s written The Devoncroix Dynasty series, featuring elegant werewolves who live among us. Ball lives in Georgia with her dogs, who have won numerous awards for agility, obedience, and canine musical freestyle. From time to time she offers donations of signed books to rescue groups and other charitable organizations.
Posted by Amber Polo at 12:30 AM No comments: 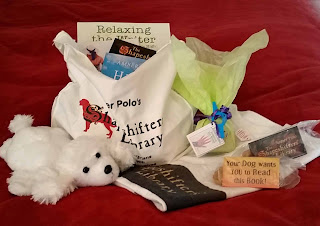 Released (Book 1 in The Shapeshifters' Library series)
has over 50 reviews on Amazon and 76 ratings on Goodreads.
I’m so thrilled I’m celebrating with a big contest.
Win one prize for yourself and one to share with your favorite librarian. 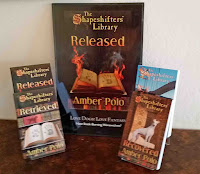 Why would your librarian love The Shapeshifter's Library series?


So, what do you have to do?
Only one thing!

Send me an email: amber@amberpolo.com
Add the Subject heading: "Celebrate Libraries Contest" and tell me the name of your favorite library (the library I'd send books to if you were chosen as the random winner.) That's all and I'll pick a random winner.Contest ends: Midnight Wednesday, September 16th, 2015

Dear Library Lovers:
f
Even though this contest doesn’t require it, I’d still love library lovers and dog lovers to visit my website, watch my book trailer, and sign up for my newsletter.
f
And please forward to your friends and librarian friends,
f
Amber

50 Plus Reviews for Released! I'm thrilled to see Released
has over 50 reviews!

To show my love of  reviewers, readers, and libraries, I'm celebrating by sharing my favorite outtakes.

And Coming Soon - Watch for a big giveaway and the chance to win prizes yourself and your favorite library. 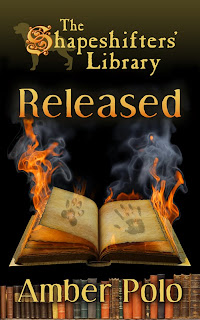 When Released, the first in The Shapeshifter's Library series, was published some of my favorite librarian scenes fell on the Editing Room floor, perhaps because they lacked paranormal twists or because contained too much library humor. Some of that humor tickles librarians and serious library lovers more than readers entranced with dog-shifters and book-burning werewolves.

So, indulge me and let me share three of my favorite outtakes.
Posted by Amber Polo at 2:00 AM No comments: