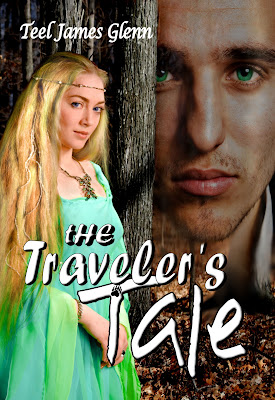 Teel: Sometimes I think I don’t so much write fantasy as allow it to come out of me; that is - whenever I try to write a non-fantasy story - even my mystery fiction always seems to have an element of fantasy or at least the bizarre in it. So I generally “give in” to my muse and let loose. The thing about fantasy, whether it is high or dark or whimsical, is that it allows dreams to be fully realized to serve the story and characters, where in other forms the characters might have to be bent to fit the world.
Amber: Tell me about what genres within fantasy you write.
Teel: I have written in several sub-genres of fantasy from adventure to the darker fantasy that borders on horror though I love the swashbuckling stuff the most. From the sword and sorcery stuff of R.E. Howard to the sword and ray gun adventures like Edgar Rice Burroughs is my most comfortable zone. I have also written a number of urban fantasy that have a comical touch. That seems to come easily to me. (My friends will tell you I have a warped sense of humor that fits that stuff).
Amber: What are your favorite fantasy novels?
Teel: The original Conan, Solomon Kane and Dark Agnes stories of Robert E. Howard are my first pick for fantasy reads, followed by the Martian Novels of E.R. Burroughs. I also read Lord Dunsany’s and Poe’s short fiction for the language. I loved the Lord Darcy stories by Randall Garret (I only wish he’d written more) and his Gandalara books. And the classics: Dracula, Frankenstein (both of which I’ve played on stage) and Lord of the Rings.
Amber: Why do readers love fantasy?
Teel: Because it is the ultimate escape fiction; it is stepping into a dream that a writer presents to you and yet allows you to make it your own.
Amber: Would you write fantasy even if no one read it?
Teel: I have. For a long time I wrote for myself - always with the idea that someday I would write for money, but the urge to write was always there. I have been so blessed to be able to make a living from what I love to do.  It allows me to let some of those characters that are crowding my mind out and make room for more. 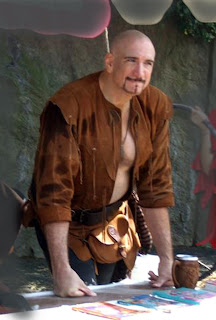 Teel James Glenn was born in Brooklyn and traveled the world for thirty years as a stuntman, fight choreographer, swordmaster, jouster, book illustrator, storyteller, bodyguard, and actor. He studied under the head of the Seoul Military Academy and Errol Flynn’s last stunt double. He choreographed realistic violence for every Shakespeare play at least once, many several times, as well at the Three Musketeers at West Point, Native Son for the Classical Theatre of Harlem, Nine Ball for Cape Cod Rep and literally hundreds of different productions.
And as a performer he's done 52 Renaissance Faires, been in many genre films and TV series including Citizen Toxie (as fight choreographer and Toxie’s double), Spenser for Hire, the Equalizer, Lord of the Strings, Spiderbabe, Dr. Horror’s House of Erotic Idiots, The Bog Creatures and most famously as Vega in the manga/gaming web series “Street Fighter: The Later Years.”
All his life experience enhances his writing. He has 25 books in print from five different publishers (all of them well reviewed). In addition, his short works have appeared in magazines including Mad, Blazing Adventures, Black Belt, Classic Pulp Fiction, Fantasy Tales, AfterburnSF, and Fantasy World Geographic.

For more information about
Teel James Glenn
visit his website.
To learn more about  his fantasy books:
Death at Dragonthroat, Tales of a Warrior Priest, The Daemonhold Curse,           Sister Warrior, & Of Swords and Sorcery
check out Gypsy Shadow Publishing
And ePress-Online
And for his Romance Fantasy:
The Horsed Thief  &  The Travelers’ Tale
Eternal Press
For a FREE copy of
One of Teel's books
send him an email
Posted by Amber Polo at 9:00 AM