Why should you as an author care? Your books probably will never be banned. Right?
The freedom to write and publish without censure is a gift to you from those who have worked hard to protect the rights of all writers. The authors of the Bill of Rights. The ACLU. And, yes, librarians. Those be-bunned creatures have protected your rights for decades. They didn’t have to love your work or even want to read it, but they understood that if censors were able to ban one book, all were in danger. They stood up in their libraries and in courtrooms.

As I wrote The Shapeshifters’ Library I reflected upon the freedom to read and the freedom to publish and what I, as a librarian, always took for granted. I incorporated the problems of libraries into a fantasy where noble dog-shifters protect knowledge from book-burning werewolves in a small Ohio town. I speculated on the many ways the werewolves among us have tried to curtail our knowledge. It became clear that banning and burning are pretty much the same thing. If a book is unavailable, it’s ideas are gone. If it never gets published, it’s unavailable.

Enter “Fifty Shades of Grey” into this year’s censorship discussions of what should be ripped from shelves and chained in the library’s basement. In a small library bookclub I facilitate, I asked a group of senior citizen-readers if they planned to read the book. We had a great discussion. One of the best comments was from a woman who said she would read it because she wanted to be able to discuss it with her grandchildren. 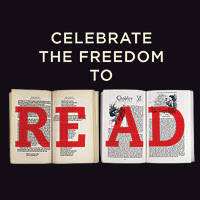 Librarians don’t judge the reason you want to read. But they do have policies detailing their individual library book selection policy. Public money can’t be stretched to buy everything published. (Remember that when you expect a library to buy your book or accept a donated copy.)

Celebrate Banned Book Week by reading a banned book. Check out these lists of the Top Ten Challenged Books for the years 2001 through 2011. I bet you find a couple of your favorites.

Full disclosure: I have an MLS and have selected books for a public library. And I’ve listened to the first third of “Fifty Shades of Grey” in audiobook.

Since I write about dog-shifter librarians who protect books fighting Book burning werewolves I found it interesting that National Dog Week preceded Banned Book Week.
And you thought my stories are fantasy! :)  Amber Polo

Take a Treat to Your Librarian!

And Read to Your Dog!