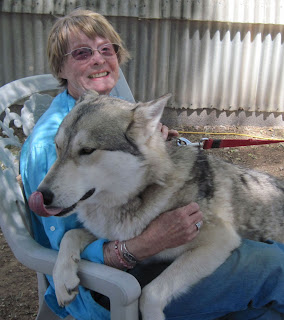 Doris McFadden’s connection with wolves started with a mystical dream in 1974 about an Arizona ranch and a white wolf. Over 10 years later she and her husband moved to that ranch in Arizona and acquired a one-year-old white Artic wolf-hybrid. Lobo was her companion for ten years and his spirit stays with Doris in her work with dogs and communication with wolves.

Facilitator of Dancing with Wolves, 2011 and 2012, an OLLI sponsored panel discussion offering multiple perspectives concerning the wolf (the rancher, environmentalist, federal and state officials, concerned citizens and wolf preservationists) attended by a wolf.

Doris is on the Board of Directors and supporter of the U.S. Wolf Refuge in Nevada. She is also a supporter of Healingwolf's Medicine Wheel Lodge in Rimrock, Arizona and often takes visitors to meet and learn about the wolves. She is an inspiration to all and recently received the name White Wolf in a spiritual ceremony at the Medicine Wheel Lodge. 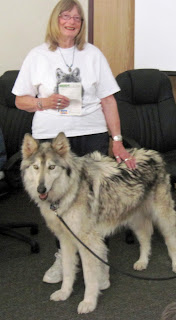 "So do what wolves have always done
and one more time before the end
lift your head in mournful cry
and howl your heart out to the sky...
Your fate lies in the hands of men."

Learn more about Doris and Dogs my post on Sept 5th.
Posted by Amber Polo at 4:19 PM