“The Call of the Wild” the Movie and More 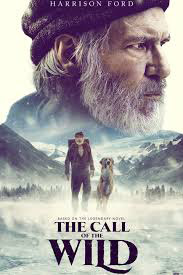 Jack London published “The Call of the Wild” in 1903 as short pulp fiction, first serialized in the Saturday Evening Post. A thrilling story of survival and wilderness adventure set during the 1890s Klondike Gold Rush, London’s writing is surprisingly modern for an almost 120-year-old work. His protagonist is the dog Buck not the human characters and the tone fits the turn of the century style of anthropomorphizing animals and accepting that they think and feel with human emotions.

London describes Buck as a St. Bernard-Scotch Shepherd mix with a long muzzle and wolfish head.  Desmond Morris’ book “Dogs; The Ultimate Dictionary of over 1,000 Dog Breeds” refers to a lot of Scotch collies. My guess Buck’s mother was one of the heavy-bodied drover’s dogs, bred to take sheep and cattle to market and fight off wolves and other predators in Scotland and England, a sturdy Lassie-sized herding dog.
The latest movie version of “The Call of the Wild,” staring Harrison Ford in the role of John Thornton will be released February 21, 2020. Harrison seems to be a perfect match for Thornton, but the role of Buck has created immediate controversy.

The movie is a live action/animated hybrid. The director’s wife Jessica Steele-Sanders adopted the dog Buckley from a Emporia Kansas animal shelter.  A digital scan of Buckley was made into a full CGI model to replace the original plan for a Burmese Mountain Dog. Critics commented that no dogs were harmed in the making of the movie--because no dogs acted in the movie.

Note: There’s also another recent movie. One called “Cats” which also has critics complaining about computers. Digital fur on stars and computer generated ears and tails offended some. But “Cats” never proposed to be about real live cats. Like “The Call of the Wild,” “Cats” is a movie for animal lovers, real and virtual. 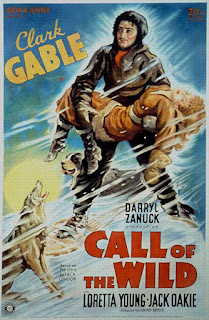 For fun, watch the 1935 movie staring Clark Gable and Loretta Young. The film bares little resemblance to London’s book. With only a small part for a dog and a very different plot, movie-makers put out a 1930s romantic comedy and saved only London’s title and the so-so-real snow.