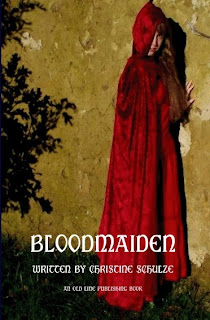 Welcome Christine E. Schulze, author of Christian Fantasy and cover model for her own books!
Amber: Why do you write fantasy?
Christine: I cannot imagine writing anything but fantasy--that is, I have tried, but failed miserably. In college, I took a fiction writing class which actually proved quite a challenge since we were required to write in the real world. I felt very restricted; the possibility of anything and everything happening had been stripped from me. I suppose that is one thing i love so much about the genre: freedom. An author can be quirky, random, and fresh like Diana Wynne Jones or tell a very classic, epic legend like J.R.R. Tolkien. Or, like myself, an author can incorporate both these methods. I truly love creating new worlds, peoples, and magics, as well as the intricate plots and deep characters so fitting in such worlds. 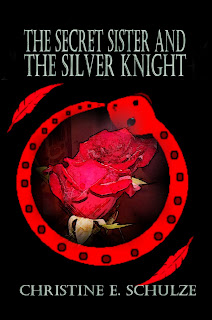 Amber: Is there any considerations in writing Christian fantasy compared to other subgenres of fantasy?

Christine: Yes, I suppose there are, though writing Christian fantasy has always come so naturally to me, I suppose I haven't thought terribly much on it until now. As a kid, around twelve or so, I decided that if I was going to keep enjoy writing books and spreading them across the world, I better give back to God by including Him too.

That being said, I've always aimed to NOT make my books sound preachy. If God is included, it needs to be natural, a part of the characters' lives or the world they live in, the same as eating or breathing. For most of my books, I use Amiel, my allegorical version of God/Christ, much like Aslan in The Chronicles of Narnia, though I occasionally have books referring to God directly, like The Pirates of Meleeon.

For most of my books, I just incorporate Christian traits like friendship, forgiveness, love, etc., which can be seen in many non-Christian books as well, such as Harry Potter's self-sacrifice in Deathly Hallows. In the words of Briana, a reviewer from The Book Pixie on reading Bloodmaiden: "Another thing I loved was the incorporation of religious elements. They were subtly done so that a Christian like me would pick up on them; however, they weren't blatantly obvious enough to detract from the story for those non-religious readers out there."

This is what I aim for in most of my books; however, I have had a few which touch upon deeper Christian issues like salvation. In The Pirates of Meleeon, this ends up being an important aspect. So, for both adamant Christians and just the regular fantasy readers, I have something for everyone.

There are also certain things I WON'T include, namely cursing and sexual immorality. This doesn't mean I never have intimate scenes; however, you'll never seeing me pairing up a threesome...okay, except in Tears of a Vampire Prince, but that wasn't a good situation for Aaryn anyways, and you'll just have to read the book to understand his plight. ^_^

So, to sum it all up: allegorical God, morals like friendship and forgiveness woven into the story, and occasional deep theme but mostly subtle symbolism that adds that Christian touch but won't turn off other readers. A final example is a reader on Goodreads who just DEVOURED my entire Hero Chronicles series. It mentions issues like jealousy, friendship, and forgiveness the characters deal with, but not in an unbelievable, preachy way. She granted five stars to the whole series, enamored with the world, edge-of-your-seat plot, and intriguing characters; needless to say, I don't think she was turned off in the least.

I honestly hope that writers and readers alike will cease shying from the Christian fantasy genre. There doesn't seem to be a lot of it out there, which is a true shame.
On a final note, I have penned and plan to publish--in the farther future--a book which shall give an end to all my books. It incorporates a lot of fantasy elements and is an epic allegory of Revelation, the last chapter in the Bible. Drawing on many characters and worlds from previous of my books, it is one Christian fantasy work I am especially excited about sharing with the world.
Amber: What are some current fantasy projects you are working on? Christine: Well, I just completed my first fanfiction novel entitled Silent Hero, which is based upon my favorite video game series, The Legend of Zelda. Zelda actually has inspired many a book from the time I was twelve. From the unique, quirky characters to the interesting plots to the rich fantasy worlds, Zelda has always been an important part of my fantasy life. I've been contemplating doing a fanfic for a very long time now, and the mood finally hit me. It was finally time. I've published the book as a free ebook on Smashwords; obviously, I can't really "sell" it or Nintendo would sue me, but at least I can give readers a good read which hopefully does the games justice.

As you can also tell, I also enjoy graphic art and a bit of modeling. I've appeared in multiple covers and other artwork for my books, including Bloodmaiden, Bloodmaiden: a fantasy anthology, and the upcoming Tears of a Vampire Prince: the First Krystine. Hence the mask and cape; no, I don't really dress like that on a daily basis.

Since I've written so many classic fantasy books now with the normal strong elements of intricate plot, vast world-building, and deep, complex characters, I'm sort of branching out more, experimenting with different projects. Silent Hero was one. I'm also trying a bit of horror; I just published a story with Victory Tales Press in A Halloween Collection Anthology: Sweet and intend to publish a horror/romance anthology of my own in the near future, entitled Broken. Also, I'm working on a book which I like to think reinvents both the novel and video game at once. It will be an extensive adventure set in an extensive fantasy world, much like Zelda or Final Fantasy. As readers follow the main character, they embody her, making decisions along the way which will majorly affect the outcome of the story and characters' lives. That book is called You, Fairie, I. I am penning it with a good friend of mine, Salvain, my first truly co-authored work.

Amber: What are your favorite fantasy novels?
Christine: What a terrible question! No, really, I actually don't read a TON, I'm so busy writing, creating coverart, composing music for my books, etc. But, here's a few favorites: The Lord of the Rings and The Hobbit; Tolkien classics; Twilight saga; for all you haters, I discovered and loved the series before I even knew it was popular--or had ever even heard of it; Chains of Gold; actually ended up inspiring Bloodmaiden; Darkangel; Brilliant! Fresh, unique, both in world-building and characters. A must-read!; Chronicles of Narnia! Resonates especially with a Christian/fantasy author like myself. Harry Potter; need I say more?; Howl's Moving Castle; too classic! Quirky, beautiful, a unique work of art!; Stardust; also a quirky but beloved, unique fantasy read.

Christine: I think readers love fantasy for much the same reason as I enjoy writing it--it's that escape and freedom which makes it all worth while. Of course, one can find escape in reading almost any genre, I suppose. But in fantasy, it seems more so. A reader feels, in a sense, more removed from their world, in a far-off place where truly anything can happen. As for my part, I revel in delving into the unique worlds, interesting characters, and often twisting, suspenseful plots fantasy has to offer as well.

Amber: Would you write fantasy even if no one read it?
Christine: That is a question I have thought upon before, and am of two minds. On the one hand, I would say definitely yes. For the way I write, I don't often sit down and try to think of something to write. It just comes to me; as a Christian, I often say that God inspires me, and I must write. I assure you I am a very cranky author when I don't have time to jot down new ideas which are literally about to explode from me.

On the other hand, I do desire for readers to enjoy my work around the world. Always have, even as a small kid. So, while I would probably still write, it would be a shame if no one else could ever read my stories or enjoy them; I would feel partly as though I squandered the gifts God has given me. But if just one person can be positively affected by a story, then maybe, just maybe, it's all been worthwhile.

Christine E. Schulze has been creating books since she was too young to even write them in words. The stories from Bloodmaiden: A Fantasy Anthology are only a small part of her vast collection spanning over thirty books, The Amielian Legacy. She hopes to inspire readers throughout the world with these books by publishing in both traditional and electronic formats to make them available to all readers.

Christine has published several stories with Calliope and Kalkion magazines and is an active member of the WEbook online writing community. She has also published several Christian/fantasy books and ebooks which are available at various online retailers, as well as publishing several eBooks via Writers-Exchange. Her latest and most exciting ventures include publishing her novel Bloodmaiden with Old Line Publishing; being a part of Victory Tales Press' Sweet Halloween Anthology; and completing her first fan-fiction, Silent Hero, based on Nintendo's Legend of Zelda and available as a free download on Smashwords. Christine currently lives in Shiloh, Illinois with her Mom, three dogs and a rabbit.

All her books can be found on either Smashwords, Amazon, or both, most as both print and ebooks

For more about Christine E. Schulze and her books visit her Website
Please consider joining and leaving a comment; guests are welcomed and much-sought-after!
and her Goodreads Page Read reviews of many of my works, and keep on the look-out for give-aways! Please feel free to send me a message and chat as well.
Schulze's Blog  also includes artwork of characters from her books.


Christine’s Contest
Leave a comment for a chance to win
A print copy of  Bloodmaiden: A Fantasy Anthology
(U.S. Residents only, please)
Posted by Amber Polo at 8:19 AM