The Mounds Anomaly by Phyliss Gunderson 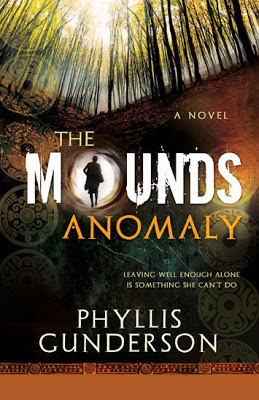 Isn't it fun when you discover an author who shares your curiosity? I came Across Phyllis Gunderson's The Mounds Anomaly and found a kindred soul. Her interest in the mounds found across the eastern United States mirrors mine and we both included the mysterious mounds in our fiction. In my "Retrieved" (The Shapeshifters' Library book 2) my shifters believe an ancient library is buried beneath a huge Ohio mound and set out to excavate it to find more about their history. In "Recovered" (The Shapeshifters' Library book 3) due out in September, my characters visit several important Midwestern mound sites.
Here's a post Phyllis wrote about the mounds. She also found The Mystic Symbol by Henriette Mertz. (Thanks Julie Wallace for sending me a copy!)

I got curious about the American mounds when I learned of farmers in the early 1800s who uncovered thousands of artifacts that shouldn’t have been under their fields: helmets, jars, calendars, and tablets carved in an unknown script.

Scientists pronounced everything, including the farmers, hoaxes and frauds.


After that, if anyone found something strange, they used it as a doorstop and shut up. I searched for additional history and found more than enough to write a mystery novel based on archaeological discoveries in North America. By lucky coincidence, “The Mounds Anomaly” comes out in time to coordinate with the new TV series, “America Unearthed,” which examines evidence of ancient world civilizations in North America. It’s fun stuff—and could change history.


The Mounds Anomaly by Phyllis Gunderson -

An ancient gold coin, a mysterious American Indian burial ground, and a Colorado canyon all have something in common---and brilliant archaeologist Mathilda Howard holds the key to solving the puzzle. Warned to keep quiet or lose her job, Mathilda risks her life to expose the truth that could change the entire history of the world in this fascinating mystery.

Mathilda (Matt) Howard can’t resist a good mystery. So when one falls into her hands, she relentlessly pieces the clues together to figure out the answer. It all starts with a forgotten coin that Matt finds in her old excavating backpack. But when she takes it to a colleague, it’s instantly branded a fake from one of the greatest hoaxes ever to occur in America.

Undeterred by the skepticism, Matt begins to dig for the truth, leading her to ancient ruins in Illinois and Michigan. But just as she makes some headway in her research, she is stopped again and again by those who don’t want the truth out—a truth that could change the entire world’s history.

Full of intrigue and action, The Mounds Anomaly will change the way you think about ancient American history.

PhyllisEthlyn Gunderson has degrees in Communications, ESL, Ancient Religious Texts, and enough credits for a minor in Anthropology. She taught English in India, Thailand, and Cambodia, marveling at the vast history and ruins of those lands. She also traveled to Belize, Egypt, England, Ireland, and China to see evidence of the past. But she is especially intrigued by the prehistoric earthworks of her own country. The Mounds Anomaly, told as a story, reveals the largely unknown civilizations that once flourished and faded in North America. She resides in Provo, Utah, always searching for unsolved mysteries and offbeat archaeology.

Find out more about Phyllis Gunderson at her website.
Posted by Amber Polo at 2:39 PM