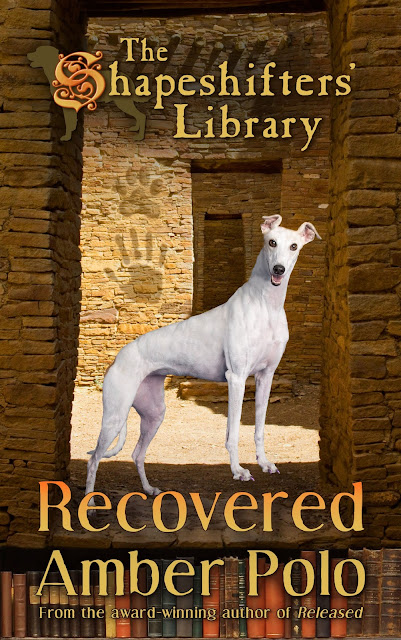 Come along with Bliss, children’s librarian and white greyhound shifter, and reformed werewolf Harry as they search for the most valuable library on the planet, chased by Sybilla and Blaze, werewolves crazed to stop them.
Recovered celebrates my love of travel, books, and dogs ...
and the thrill of searching for treasure.


You don't have to have read the first two to take this trip. But I wouldn't mind if you did. :)

And if you're wondering, the lovely naked heroine cover model is Jenny who lives in Louisiana.

Bliss D. Light was just an ordinary children’s librarian until one day she discovered she could grow a tail.  Now her life is filled with more magic than any of the fairy tales she tells the children who gather at her feet at the Shipsfeather library.  Like many of the other residents of Shipsfeather, Ohio, Bliss is a dog-shifter, and her newly discovered ability to change from human form into that of a sleek white greyhound has left her yearning to know more about her true heritage. The answer to all her questions, she is certain, lies with the dog-shifters’ long lost Library of the Ancients and, undeterred by the fact that thousands before her have searched, she sets out to find it.

Accompanied by her best friend Harry, a disgraced werewolf/dog-shifter mix, and hotly pursued by the evil werewolf team of Sybilla and Blaze, Bliss’s quest takes her across the sacred sites and ancient mounds of the American Southwest. Though kidnapped by dogcatchers, sold into racetrack slavery and forced to fight wolf dogs to survive, Harry and Bliss never lose sight of their goal—or each other. Because the only thing more important than finding the ancient lost treasure might just be preserving what they already have found: an unlikely love that could be the first step toward bringing two ancient enemy races together.


Another wonderful cover!
Gratitude to the lovely Connie Lee Marie Fisher
for her talent & love of dogs.
Posted by Amber Polo at 8:53 AM